New level system replaces the old, hardcoded system with a much more extandable and unified system.
Adding a new level (or deleting an existing one) to a scene can be done in Levels panel under SceneOptions inspector.

Making an entity only visible in a certain level combinations can be done with selecting an entity then going in Scene Level Visibilities panel under Entity Inspector. 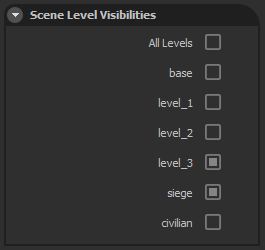 Select the levels you want this entity to be visible. Entity levels in missions are checked as a whole. 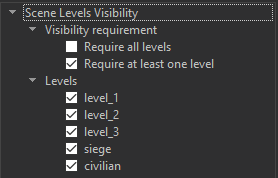 There are two options to see entities with different level visibilities.

1) Require all levels (Same as missions)
2) Require at least one level (Editor only, to see all entities at once)

Require at least one level 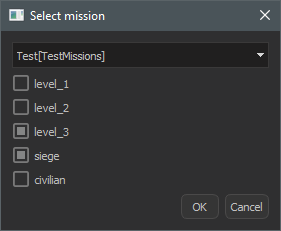 For this purpose, Start mission as window modified in a way that allows you to select level combinations. If you want to test a castle scene with level_1 and siege mode, Select these leves and press OK. The mission will start in Level 1 Siege mode.